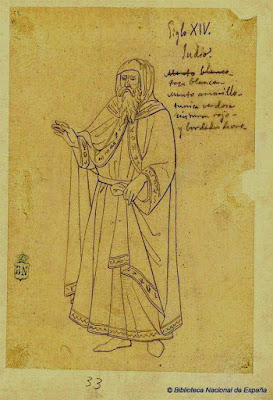 The great rabbi R. Isaac Campanton, known as the Gaon of Castile (including Leon), of Spain, son of the great rabbi R. Jacob, and R. Israel Ashkenazi received the traditions from their fathers and our rabbis of previous generations in about 5120 (1360). R. Isaac Campanton spread Torah widely and had many students. He lived a long life, dying in the year 5223 (1463). He had a regal appearance. R. Isaac de Leon, one of his students, was knowledgeable in miracles, and died at the age of seventy. R. Isaac Aboab (refereeing to the second), a great sage and one of his students, died in Portugal in the year 5253 (1493), about seven months after the exile from Spain. He was sixty years old at his death, and was one of the students of the above-named R. Isaac Campanton (...)

Picture of a drawing by Manuel Castellano (1846-1880). Title: Attire. It is specified in the note on the upper right hand that it refers to Jewish clothing in the 14th century.
Publicado por JJ en 0:00

Enviar por correo electrónicoEscribe un blogCompartir con TwitterCompartir con FacebookCompartir en Pinterest
Entrada antigua Inicio
"...it is known that you live in Zamora, and many others tell me that you believe in the Torah" - J. Alfonso de Baena (circa 1365-1435)
All Rights Reserved ©