Lucky La Crosse for having higher learning institutions to be able to share benefits of international research. Jesús Jambrina, one of my former Viterbo University’s World Languages and Cultures Department colleagues’s research of the Jews of Zamora, Spain led to being awarded the Medal of the Four Synagogues 3 years ago, and Dr. Abraham Haim, President of the Council of Jewish Sephardi Community of Jerusalem returned recently with a Diploma of Recognition for the inclusion of the topic of Sephardic Jews in courses, research and campus activities at Viterbo.

During Dr. Haim’s weeklong visit he gave numerous presentations throughout our area regarding the Sephardi ( Spanish Jews) and their Ladino language. The Thursday of his visit he had a meeting breakfast followed by a road trip to talk on Decorah’s Luther College campus before speaking to our La Crosse Congregation Sons of Abraham that evening, where he received a warm welcome and dinner.

During that visit Dr. Haim gave a brief talk of Ladino history accompanied with examples of Ladino music. He sang some songs a cappela, and others accompanied on guitar by spiritual leader Brian Serle along with some group singing.

The following morning courtesy of our public library, I attended a more extensive overview of the Sefardi, Spanish and Portuguese Jews who in 1496-7 had to go into exile with their culture of music, foods and Ladino language.

Using the basic "W" question Dr. Haim answered the them regarding the Sephardi, the Jewish Spaniards: 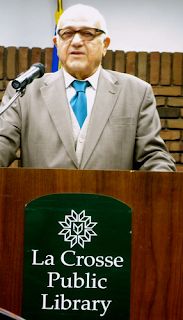 Where did they live? They lived on the Iberian peninsula but not limited to the Andalucia geographical location although it was the center of Jewish life in the Middle Ages close to Granada, the sea, in the capitals, towns and cities, Majorca, the Canary Isles, etc.

Who were the Sephardi? After the 15th century these Spanish Jews were numerous proud, cultural and creative ~600,000 of the world’s 1.5 million world Jews integrated Spain. They were culturally moderate without losing their identity.

During the muslim 7 centuries of rule after invading and conquering Spain (except for Asturias in the north) Muslims, Jews and Christians coexisted. The Jews’s position was affected but treated better than living under the visigoths and even North African Jews also immigrated to the Iberian peninsula like Western European Jews who would eventually move where they could practice their Judaism in Iberia.


Between the 10th and the 12th centuries -the Golden Age- the Sephardi were accepted in society and flourished religiously, culturally, and economically. It wasn’t until the end of the era in the mid 12th century, and new Berber rule that Jewish persecution, and a massacre occurred in Granada, and both Muslims and Jews fled to Toledo which had been reconquered by Christian forces (~1086)

After the reconquest (of Toledo and other northern christian cities), the Jews translated Arabic texts into the Romance Languages and “also contributed to botany, geography, medicine, mathematics, poetry and philosophy.” Several synagogues were built in Toledo.

“The anti-Jewish riots of 1391 and the Alhambra Decree of 1492, as a result of which the majority of Jews in Spain (around 300,000) converted to Catholicism and those who continued to practice Judaism (between 40,000 and 80,000) were forced into exile, although many thousands including Moroccan Jews returned in the years following the expulsion.”

Ferdinand and Isabel united with nobility for the 1492 Inquisition forced the Jews to either convert to Catholicism, be killed (buried alive)/ be expelled. 1/3 of the Jewish population left Spain.

Jews had been previously expelled also from France and Germany in the 13rd  and 14th centuries. In 1492 Spain Jews lost their property, careers, but their culture was left in tact. The same thing happened in Portugal 5 years later.

The Ottoman Empire controlled most of southeastern Europe from the 15th- early 20th Century… The Jews continued to begin new lives elsewhere.
What language did they speak? They spoke dialects of Iberian languages (Castilian, Catalan, Gallego, Leones...) but moved so much that their ladino language which is a mixture of Spanish and Yiddish served as a common thread. Language changes include j-ch, the change of the r and d sounds, u vs o. Those who speak Spanish can understand it due to its Spanish roots.
Some converts returned to Judaism in the 16th and following centuries all across Europe and the Americas. Other Sephardi who survived the inquisition, immigrated to Israel at the end of the 19th Century. Many people of Spanish descent are still discovering their Sephardi roots today.

In 2014, the descendants of Sephardi Jews, who were exiled in 1492, were offered Spanish citizenship, without being required to move to Spain and/or renounce any other citizenship, which they currently may have.”

Like yiddish, the future of the ladino language is in danger of disappearing. Dr. Haim reminded us the written word will live on forever…

Thank you for returning to La Crosse Dr. Haim and sharing your Sephardic heritage.